This is the free english translation of my former german post . A little story about a tomcat with happy end.

Tigger is a red tabby tomcat who’s home is right under the roof in a nice little apartment. He lives there together with Susanne my friend and neighbor and with Bruni an old chartreux cat. They are both house cats and never go outside. Tigger is a shy gay and he is also a little scared. But he is very curious. So Tigger loves to explore the staircase sometimes.
In summer he spends much time on the roof. Up there is his kingdom where he is the unchallenged ruler. Tomcat Tigger has also the talent to hide so perfectly that nobody ever can find him when he doesn’t want to be found. But one day this special talent was not for his good at all.
On a summer evening Susanne was looking for Tigger and could not find him. After some time she gave up and thought by herself: so or so I have no chance when he doesn’t want to be found, he will surely be back in the morning when he is hungry. But what she didn’t know, this time her poor tomcat hoped desperately that she would find him.
Susanne went to sleep and in the next morning no Tigger was anywhere to be seen. Now she was very concerned and afraid that may be he was fallen from the roof. Our house is really high with five floors. So she hurried into the backyard to look for her tomcat. Susanne searched for him all over the garden behind every tree and in every bush…he was not there. At last she went to the old external stair that leads down to the basement.
And down there in a dark nasty corner she finally found him.
Tigger had big wide eyes and didn’t move at all. He sat there like from stone and his fur was over and over covered with snails. That poor tomcat must have spent the whole night in this position, so scared that he could not move and all the snails had enough time to find a nice little place on him.
Susanne touched him very carefully and tried to find out wether he was injured. She put all the snails from his fur and took him slowly into her armes. He seemed to be alright and Susanne went with Tigger into our house. The last stair she let him down just to see wether he can move and run normally. And for her big relief he could. Like a thunderbolt he run into the apartment and first of all on the litter box.
After that he started to clean his fur and did not stop for at least two hours. The rest of the day Tigger slept in Susannes bed totally exhausted.
So the only explanation for this unwanted adventure was that he somehow came to the backyard over the staircase. Somebody has opened the door to the garden, Tigger slipped out and the door behind him was shut. And so poor Tigger had to spent all the night on a strange planet with strange noises and strange creatures. 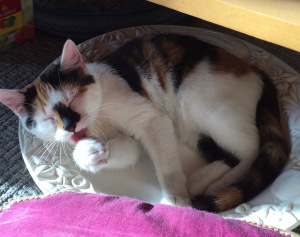 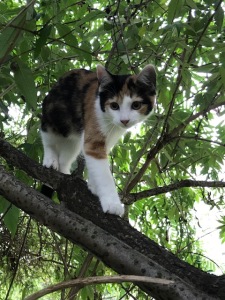